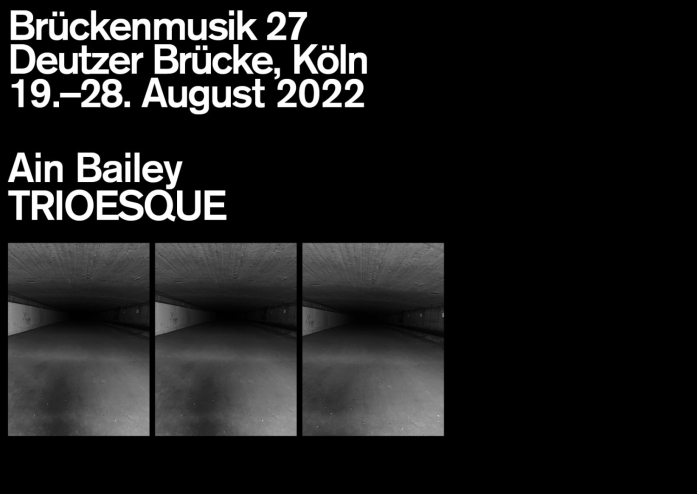 The starting points for Ain Bailey’s site- and situation-specific sound work TRIOESQUE are sounds recorded in the centres of the three chambers of the Deutzer Brücke. From this sound material, the artist composes three musical pieces that are played back into the spaces, so they can mix with the spatial sounds on site.

The overall effect of TRIOESQUE can only be experienced by joining a group and walking through the 440-metre-long space. The activity of moving collectively in the tunnel-like voids becomes part of the listening and perception process.

Ain Bailey is a composer, artist, and DJ based in London. Her practice explores sonic autobiographies, architectural acoustics, and performance. Bailey’s sound works are inspired by ideas and reflections on silence and absence, architectural urban spaces, and community-based feminist activism. Her electroacoustic compositions are created for a variety of forms, including multi-channel and mixed media installations and soundtracks for moving images, live performances, and dance. Since 2018 Ain Bailey has been leading sound workshops with refugees from the LGBTQ+ community in the London area, commissioned by the Serpentine Gallery and in association with Micro Rainbow. Ain Bailey has had frequent encounters with the city of Cologne in her career as a sound artist, starting with various projects for the dance company Mouvoir during the last 15 years, and most recently at this year’s edition of Poetica, the international Festival for World Literature organised by the University of Cologne.