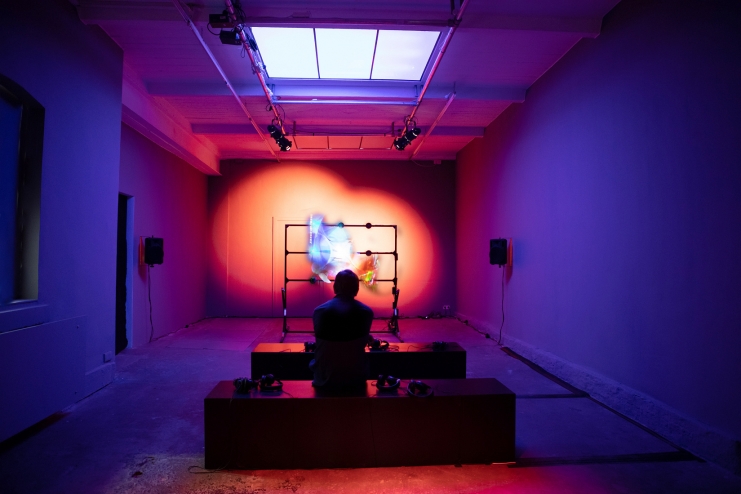 Today, the future is by no means merely projected into outer space. Sci-(no)-Fi demonstrates a more contemporary notion of the vision of tomorrow. The title of the exhibition can be read in different ways: as Science Fiction, as Science Non-Fiction, and not least as Sino-Fiction, a specifically Chinese understanding of the system and society in the digital age. For China’s rapid rise to global superpower is also happening technologically. The era of the Cold War is over, a time when the Soviet Union and the United States played out the rivalry between their systems through defining a future in space. Today the transition into a new era is quite earthbound – with technologies that affect people’s everyday and social lives.

And while given the current social changes, the ‘West’ does not know how it should face the tempo set by China – whether with condescension or awe, fear or ignorance – Sci-(no)-Fi looks soberly at an already quite present future. .

The exhibition encompasses three rooms at the Academyspace – beginning with the display window that invites you to enter the world of the future. Forming the core of the show is an installation developed by Swooding Architects (Hong Kong), a team of architects and city planners, and the artist collective Zheng Mahler (Hong Kong/Australia) along with curator Mi You. It is a hologram that renders the influence of future technologies on our social spheres ‘graspable’ using the examples of China and Hong Kong. In addition, the research results and background information on the work will be presented using narratives and spatial concepts of tomorrow, which artist and researcher Andreas Niegl has contributed to.

The exhibition will be accompanied by two workshops. A first workshop followed by a 24-hour writing marathon deals with collecting ideas for ‘actionable speculations‘. Input for speculating on that which will come will be provided by talks from various disciplines, given by Swooding Architects, the Economic Space Agency, Zheng Mahler and the artist Aiwen Yin, who deals with future forms of social institutions like marriage.

In a second workshop, we will reflect on the findings from Sci-(no)-Fi – on concepts for a future in which hybridity has become a matter of course for all spheres of society (economy, technology, city planning, love).