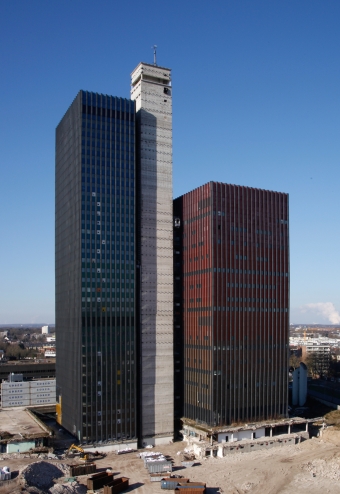 AsBest as German Waves (Die Deutsche Welle) is an art project in cooperation between the artist Jan Glisman and the Cologne Art Association Artrmx. e.V..
The project focuses on the blowing up of the former asbestos-loaded skyscraper of the radio station „Deutsche Welle“ from the cityscape of Cologne. The destruction of the asbestos contaminated building of one of the most important German radio stations is addressed by the artist in order to question sustainable development of buildings in an urban context.

Gutting, safe removal of pollutants, dismantling of the facade elements to the controlled demolition or removal of the remaining shell towers only vaguely put into words the size dimension of this project. The work of the artist focuses here on an intensive research by the production of video and photo material, which document the deconstruction and the coring. Based on this material, the different phases of the transformation of the building into artistic works are implemented.

The developments of the first works will be shown as an introduction to this project on 1 June 2018 in an exhibition in the premises of the Kunstverein artrmx e.V. in Cologne.

The exhibition is supported by the Cultural Office of the City of Cologne, the Landschaftsverband Rheinland, the District Representation Cologne Ehrenfeld as well as by the companies Inficon and WSK Köln.